Now you might think this blog post sounds like a guide for some kind of a self-help post on how to stop ‘procrastinating’ from reading the first line, however I can firmly assure you, it is . Not even CLOSE.

Procrastination like the Mayweather and Pacquiao fight is a very much overrated battle. According to psychologist Professor Clarry Lay, a prominent writer on procrastination… He stated that “procrastination occurs when there is a temporal gap between an intended behavior and enacted behavior” which basically means there’s always a significant time period between when a person intends on doing something and when they actually do it.

I found myself in such predicament during my first year at university and I handled the situation in the worst way possible. I was a bag of mess, in-between the procrastination and the excuses, I cried for a solid three months until my first Christmas break. I cried every day because I was struggling so much and I missed home even though I practically went home every weekend assuming I had no group assignment, exams or deadlines keeping me. I went home at least 3 times a month. I was always exhausted from the studying I never did.

When it comes to procrastination, I’m sure everyone has their favorite form of procrastination such as rubbish television, stalking others on every social media forum known to man, eating, constantly going out etc; for me a decent television show did the trick. Still does.

There is an old saying that goes..

“You can’t really understand another person’s experience until you’ve walked a mile in their shoes.”

This saying is applicable in both a positive and negative way even though the stigma attached is always spun negatively.

Anyways, before embarking on my own university experience, I’d heard so much about university from my at the time teachers, family, family friends, even university students who visited my sixth form to talk about the great, thrilling and fun packed adventure that is university; can’t say it has panned out the way they’d described it to be, if anything I realised that they were simply speaking from a biased experience, as would anyone else and their university experience. I can tell you now, you will have more acquaintances than you will friends, there will be people who don’t enjoy the clubbing experience, not everyone will be a drinker like you would imagine, everyone you meet will not be interested or open share your religious beliefs, taking drugs is nothing new, you will encounter bullies  and you may or may not get accuse of rape – true story (this firmly depends on your actions during your crazy night outs). (Jeremiah 29:11 speaks)

I can remember the first week of my university orientation. Every lecturer, librarian and even the bus drivers I encountered kept saying the same thing ‘ …everyone is in the same boat as you, everyone is scared.’ Like saying that meant it would be a lot easier to settle down into this new environment filled with anxiety; as if bonding over our unnerving fears is a solid way to form any sort of relationships, but when you put an introvert in an unnerving situation, we tend to flight as oppose to fight and that is why their advice never worked for me.

University is like a three-legged sac race where both parties have to work together to complete the race or even win and in that sac is my entire life and future but without putting in an ample amount of effort, being organised and being time conscious, you will never achieve what you hope to, by when you need to.

My first year at University was no fun roller coaster, and I procrastinated so much that I was so worried I might not even get through the academic year; I remember calling my Mum to let her know about my worries and the conversation went something like this:

Me: Mum, I don’t think I am going to pass one of my modules, and I just wanted to let you know so when you see the results you won’t be surprised.

Mum: Ehnn, what is you will not pass? What do you mean?

Me: I am struggling and I don’t understand half of what has been taught even if I go back on my notes

Mum: Then speak up, speak to your lecturers and let them know you don’t understand, is that not why you are paying tuition fees? You know me or your dad’s certificates kor wa transferable, don’t even bring rubbish report and come and meet me in this house ooo!

Me: Okay, but I am coming home next week okay?

Mum: No, don’t come, stay there and do your work first, I don’t want rubbish results, keep trying your best, you can do it! You need to pay more attention and try harder – everyone else doing the module don’t have two heads and they are not failing so why should my own daughter fail.

Why is it in the midst of comforting you, African parents still manage to manage to throw one, two or three jabs at you.

During my first year, I found out that in some of my subjects attendance contributed towards my overall grade so I attempted to master the art of sleeping with my eyes open – BIG FAIL! A friend of mine once brought her blanket to one of our 9am lectures, she sat at the very back of the lecture room, right after signing in herself on the register; she proceeded to sleeping through the entire lecture and when the lecture was over, she got up and walked away. The funny part was no one had to wake her up, it was like she had set herself an alarm in her head, just in time for the end of the lecture.

I am now in what is considered my third year of study at university, currently undertaking my placement year. This blog post is two years overdue. Do you understand what I am trying to say?

A wise man once said….

But when there’s a significant time period between when you intend on doing something and when you actually do it, just think – 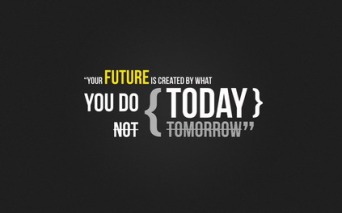 2 thoughts on “Procrastination is a tiresome act.”