Whenever it rained; I thought God had just finished washing his clothes in a bucket and decided to pour it down on us. And when it snowed, God was de-icing his freezer! How silly does that sound. I was 6 years old at the time. Yet I was told of God love for me but I never really did understand the depth of it.

I never questioned it.

Why should I? God has never been mean to me and what’s a little soapy water between friends. With this knowledge, I would always open my mouth whenever it started to rain – it just dawned on me that I was supposedly drinking soapy water –  LOL!

I realise one thing – at that age, nothing I really thought matter actually mattered. Most probably half of what I thought was true is now completely ludicrous for example eating beans made you grow taller; yet I believed! When I was younger, I had this obsession with white birds and the white marks that supposedly appear on your nail beds every time you shake your hands up really fast, down, up, down (a myth). I would shake both my hands like I had no ligaments hoping to see a white mark on my nail beds when I’d stopped,=. At the time I thought it symbolises good luck and well a level of coolness only a few people could attain – sometimes I would hit jackpot, and if I didn’t get one, everyone heard about it and if I did – CERTAINLY everyone MUST hear about it.

I didn’t care the time that I was nicknamed ‘Orobo’ which means ‘fat’ in Yoruba; simply because nearly every summer I would travel abroad to see my mother. I was in boarding school in Nigeria at the time. I honestly didn’t even care – I went about my business like it was nothing, didn’t really have any business at that age anyways.

Being compared to someone who was a lot skinnier than you made it easy for that kind of nickname stick; being called ‘Orobo’ stuck like glue. Funny thing is I was actually the right weight for my age at the time yet people felt the need to compare how darker and plumier I was to every other girl especially my sister. Self-image at that age is never formed by what you think of yourself, but what others thinks of you. When I was at boarding school, I was not called by my name instead my name played a substitute to comparison, body form, faultered self image and well what others thought I was. At the age of 6 I was more concern with tasting God’s soapy water than I was concern by how many times I was referred to as ‘fat’ as oppose to my actual name.

Changing environments and starting afresh somewhere else, I realise that I let the words and choices of others get to me so much, that I became this introverted, depressed and anxious individual, it’s felt like the more I was tried to fight my way, the more I realised the world is round and I’m merely going round in circle trying to avoid situations and people. You don’t get a choice of picking family but you get to choose who you become friends with and I chose really well.

I say all this to say ‘During secondary school, like any average child, I got bullied at school and at first I was one of those people who wouldn’t tell anyone about my experience; I would retreat from everyone and anyone and my family and friends picked up on that. My mum, God bless her was shocked when I finally told her about all my experiences and she probably wanted to deck me that day because she was so shocked that I didn’t stand up for myself, despite her many preaching, but I don’t think she realised that at the time, I wasn’t faced with just one bully but several from all age group – and at this point, they were not stating anything out of the obvious, I’d gained a lot of weight and well now living up to the name I was once called. Let’s just say my mum’s words finally yielded results that helped me cut my bullies in half.’  I went through a phrase where I would go out of my way to avoid coming in contact with a batch of rotten fruits simply because of the amount of insults they would hurled at me, funny thing now is a lot of those words like ‘trampoline cheeks’ is part of what I love about myself –  I have this one friend who, for the most part, we would go everywhere together – only because I never wanted to go anywhere and if I did end up going out, I always had conditions (I sincerely cannot understand how she put up with me.) She had to drag me everywhere we ended up going because of how bad I became socially, God bless her too because at first she didn’t understand when I would tell her I want to walk the long way to my next lesson at school when all I had to do is just simply walk less than 40 seconds to my next class. After a while she realised and questioned me about it, I told her the truth and after that day whenever she saw that batch of rotten fruits, hanging around their usual spot, she would always walk with me the long way to our next lesson, she stood up for me when I couldn’t stand up for myself and pushed me! Everyone needs a friend like that! A friend sent me a picture of this child 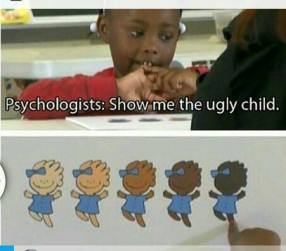 And I honestly felt sick thinking about how many children like this child felt the same way. Whatever happened to dancing in the rain, laughing about nothing and just being silly, now all I see are children who do not understand that there’s no difference between 5pm and 17:00, though it means the same thing but it’s just down to perception.

Yes, being labelled ‘OROBO’ did effects me growing up, but I have come to realise that I can’t stop people from speaking about, at or labelling me but what I can do is choose how it affects or doesn’t affect me. For someone like me, it’s no walk in the park but choosing to take that high road and move on about my business will be the ; and yes, I have business now! Actually scratch that – the greatest gift you can choose to reward yourself is letting go. Read my post on waving the White Flag! One thing that always helps me and I pray it helps you too is this quote: “God doesn’t look at ability but availability” So it’s not I’m too fat to do this or I’m too short to do this or even I don’t know what to do or I’m not beautiful enough to go for it or who am I to do this?

You just need to go for it.

One thought on “Heaven Has No Washing Machine!”